With over a million software developers in the Central Eastern Europe region, about a quarter of them in Poland, Ukraine, Romania and the Czech Republic, are also reaching a creditable level of a 100 thousand 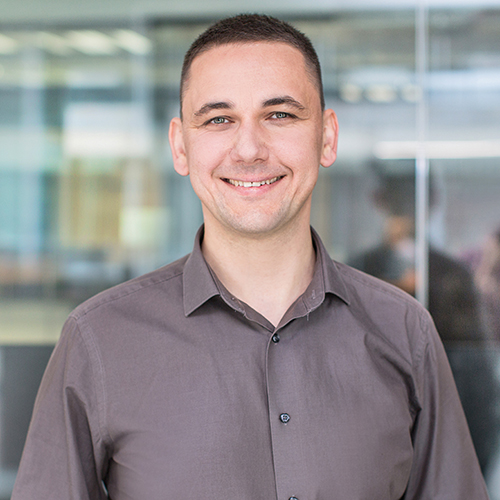 Co-founder of infoShare tech conference and infoShare Academy coding school, member of the Startup Poland Foundation Advisory Board. Previously a senior manager at wp.pl responsible for tech and business development of the biggest Polish e-mail service, adserver technology, search services, and many more.

I am really proud that, based on Stack Overflow data, we can present, for the first time, such a comprehensive study of the software developer market in the CEE region. This shows that countries in the region have a real talent pool in the IT industry that can help their economies to take the advantage of either attracting the biggest internationaltional tech companies or building strong local software challengers. Additionally, these numbers also support rising startup ecosystems.

Another interesting point is that, in the majority of the CEE countries, we are seeing a huge concentration of developers in their capital cities, reaching up to 93% in Latvia. In contrast, Poland’s, capital Warsaw accounts for only for 29%, and in Ukraine, Kiev numbers 43%.

If you look at software developer density, the number of software developers compared to the labor force as a whole, we see that Slovakia and Estonia are true leaders, achieving 3.7 and 3.0, developers per 100 working people respectively, versus a regional average of around 1.3.

Poland is the biggest, most diversified country in the region with 254 thousand developers and seven hubs (Warsaw, Kraków, Wrocław, Katowice, Poznań, Gdańsk and Łodź) each with at least 10 thousand developers. Being based in Poland I find this quite satisfying, but on the other hand I see that there is still at least 50 thousand employees missing on the market. Therefore, the national and local governments should treat this seriously, constantly looking for opportunities by improving educational models and building relocation incentives for experts from other cities and countries. Because, in the face of the Industry 4.0 revolution, and with the almost total digitalization of every aspect of our lives, the potential of developers can act as the most important competitive advantage for their economies.

Across CEE, 15% of Web developers are using the Java Web stack

Data definitions and notes of caution 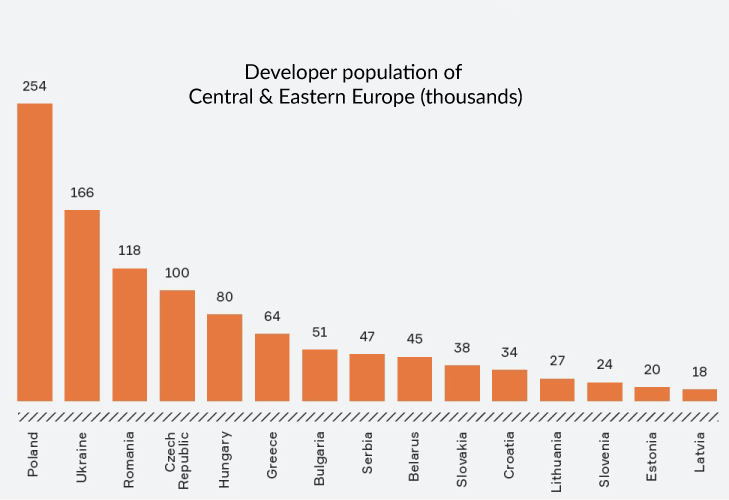 THERE ARE JUST OVER 1 MILLION DEVELOPERS IN CEE

Nearly a quarter (24%) are based in Poland; additional 35% in Ukraine, Romania, and Czech Rep. 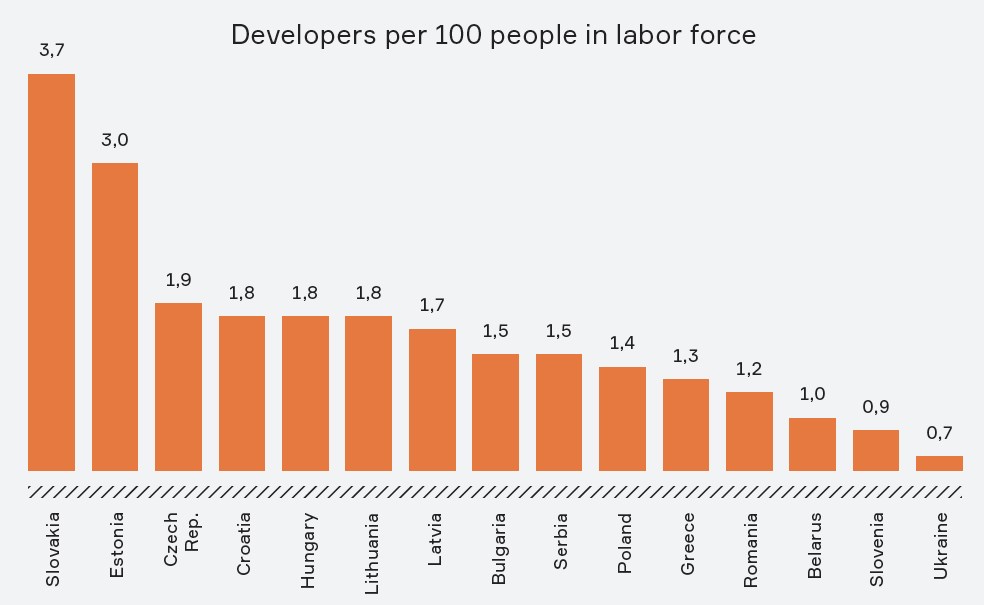 THERE ARE 1.3 DEVELOPERS FOR EVERY 100 PEOPLE IN THE LABOR FORCE ACROSS CEE

Slovakia and Estonia have especially high densities of developers 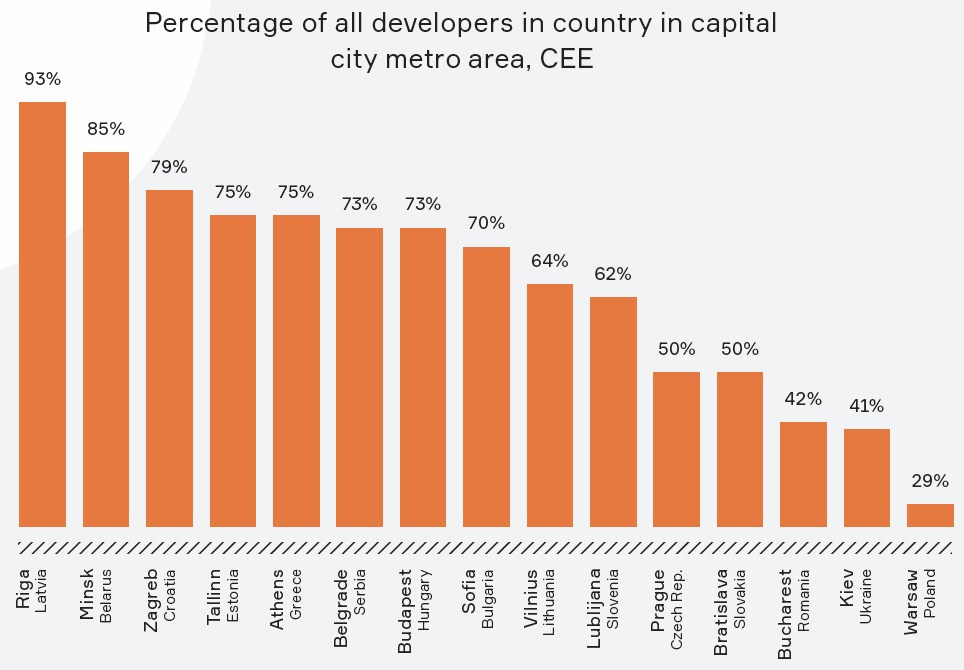 By comparison, roughly 7% of developers in the USA are in the Washington DC area 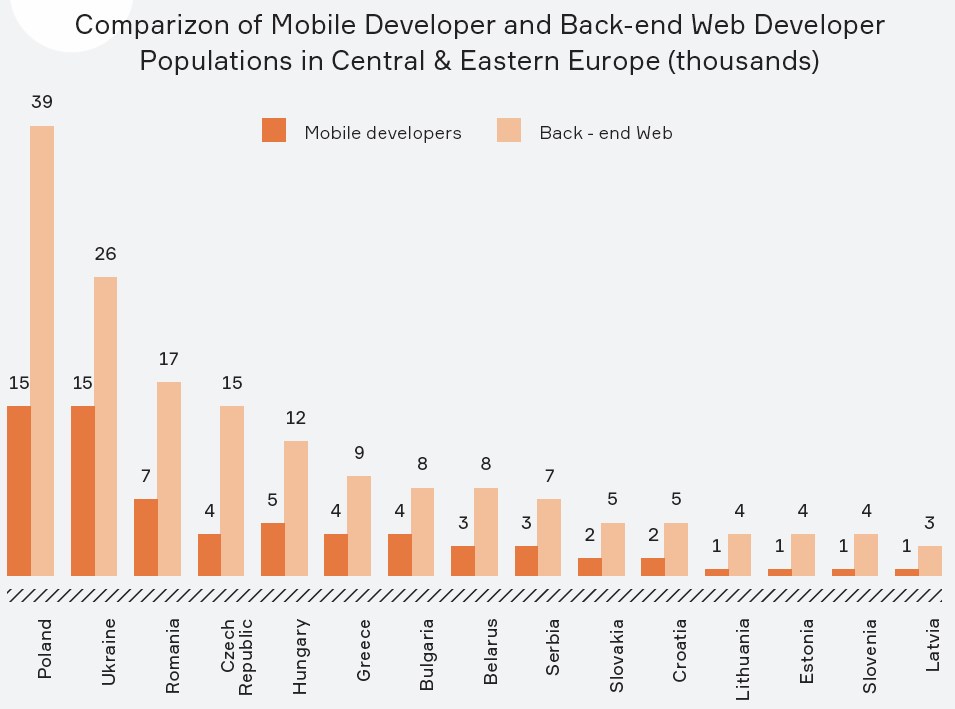 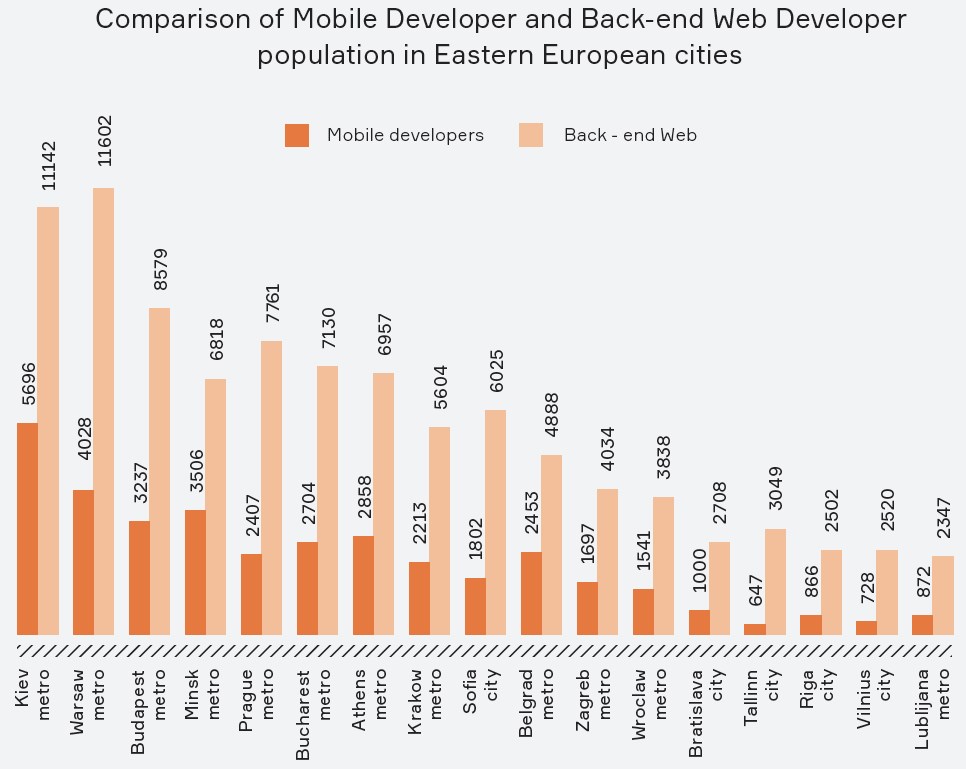 HIGHEST METRO-LEVEL POPULATION OF MOBILE DEVELOPERS IN KIEV AND WARSAW 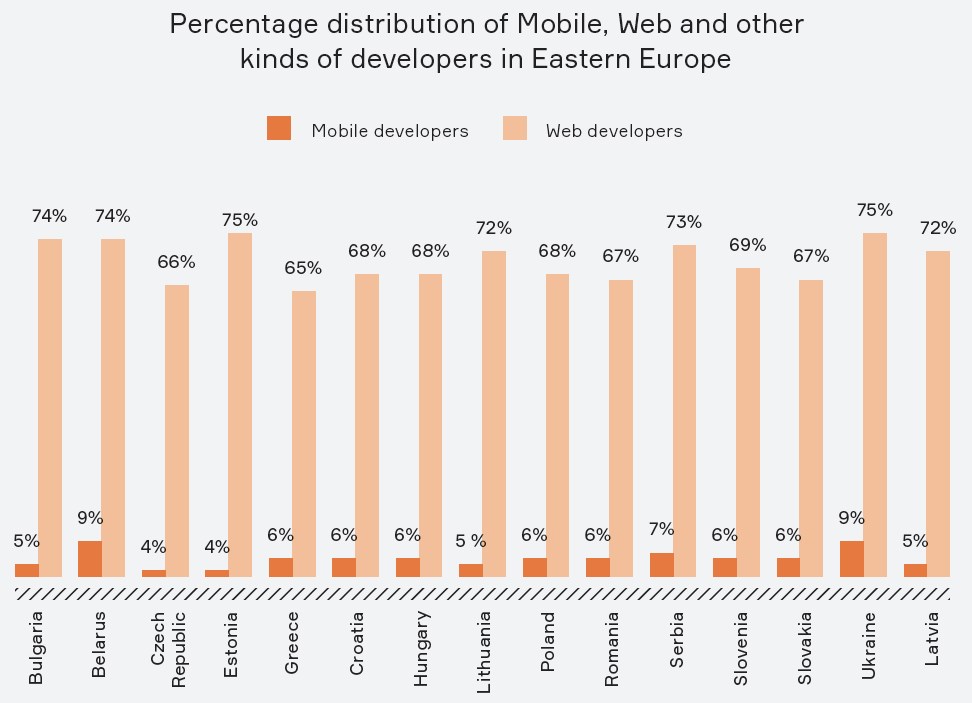 Majority of Belarusian developers are located in Minsk

Majority of Belarusian developers are located in Minsk

As seen in other CEE countries, the majority are concentrated in the capital city of Prague

While this is a relatively small number, in Tallinn, this represents almost 3.5% of the total population

The vast majority of Hungarian developers are concentrated in Budapest

As in other Eastern/Central European cities, most Latvian developers are concentrated in the capital city of Riga

76% of Polish developers are spread across Warsaw, Krakow, Wroclaw, Katowice, Poznan and Gdansk/Gdynia 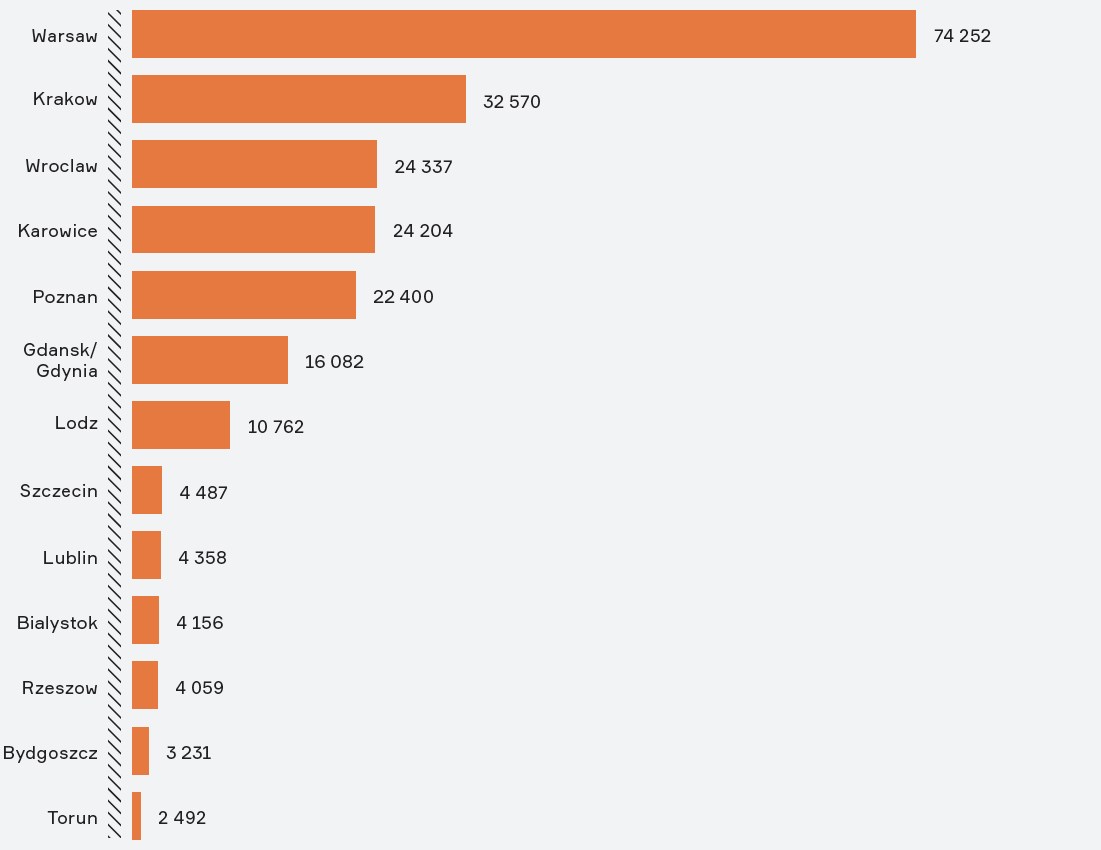 Bratislava is the main location for developers in Slovakia

While most Ukraine developers are located in Kiev, there are also relatively high populations of Ukrainian developers 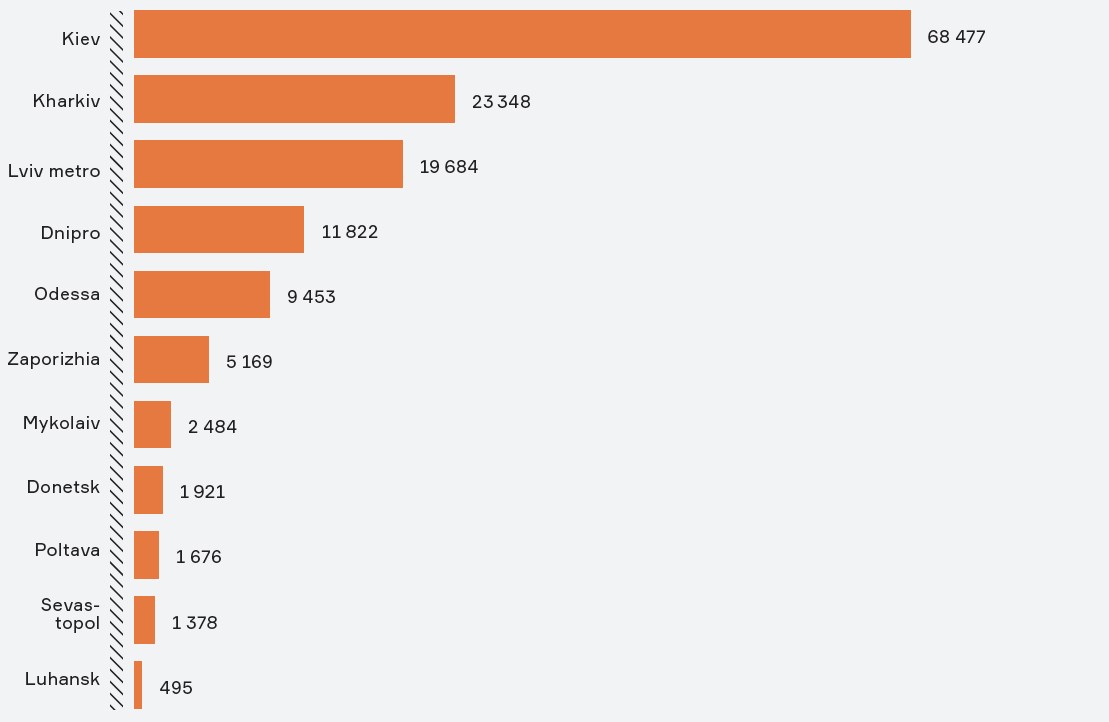 PHP IS THE MOST POPULAR WEB LANGUAGE THROUGHOUT CEE

The exception is Belarus, where Java has taken its place

IN TERMS OF WEB STACK DEVELOPER SHARES, CEE RESEMBLES SE ASIA AND LATAM MORE CLOSELY THAN THE REST OF EUROPE

Percentage developer share for most common Web stacks, all regions

Percentage of developers who use Python for Web development Central & Eastern Europe, 2012-2016 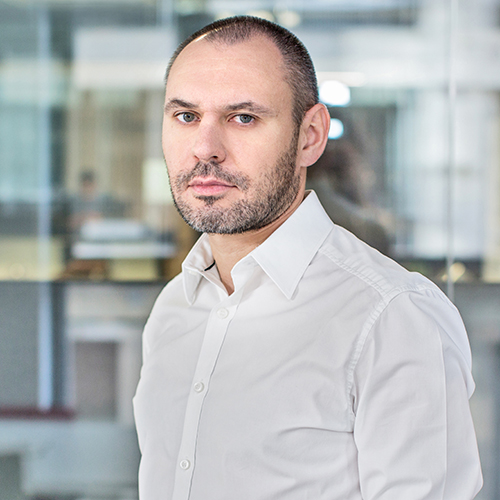 Although we might say that PHP is rather not sexy, it still holds the position of the most popular web language, not only in Poland, but also across the CEE region. It is worth noticing that Python is favoured in North America, the British Isles, the Nordics, Western Europe and even Russia, but not in Eastern Europe. This will probably change soon due to the dynamic increase of Python usage in the region.

JavaScript is the most approved programming language of the world

JavaScript is the most approved programming language of the world, used by nearly 62% of developers. A large variety of frameworks and libraries, such as ReactJS, AngularJS, Vue.js or Node.js make this language more and more in demand every year. This is what’s happening in Poland – PHP remains at the same level, but Node.js is growing dynamically. 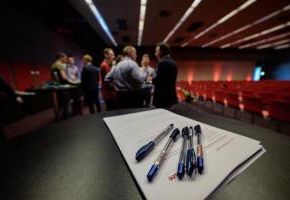 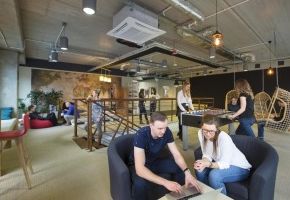